There is nothing this mistress likes as much as she likes her shoe fetish. She likes to not only wear them, but to also use them to crush slaves and losers. But today she was not crushing any slave or loser. She went to the house of a mistress who she has beef with and she used her high heels to spoil her expensive and well taken care of wooden floor.

Mistresses have fun at slave's expense

These mistresses were going for a party at one of their friend's house. They were all dressed to kill but to make sure the party was an awesome one, one of them suggested that they get a slave and have fun at his expense. They agreed and had one. They took him to the party and had fun doing all kinds of humiliating things to him. He could do nothing against all of them.

Lady Tanka was wearing her high heels when she realized she had passed somewhere dirty and her heels were dirty. She was pissed off because she did not want to show up at the function she was attending with her heels dirty. She saw a loser and pulled him into an alley and she humiliated him and forced him to lick her heels clean. The terrified loser did not have an option but to comply. 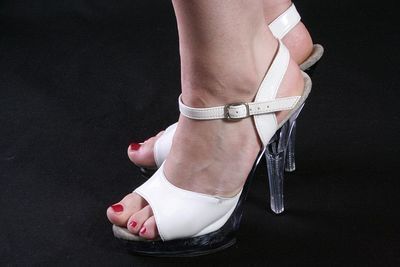 Lady Angela learned about shoe fetish and was dying to try it. She looked for a loser and had fun making him lick her feet and her shoes. She was very confident while doing everything that one would have been forgiven to think that she invented the fetish!But she was a newbie and did not want it to be known so she projected confidence to hide her nervousness about it all.

Naughty mistresses have fun with stranger

Mistresses Mikaila and Nina were feeling naughty today and wanted to have some fun. They sat on the couch and made out while recording it. They then decided to send it to 5 random numbers and see the response. One guy fascinated them because he was naughty and handsome. They asked him if he could lick their feet while they made out and he told them he would suck their toes as well. They invited him over and had the best time ever.

Mistress and her love for high heels

This mistress loves high heels and was out shopping for them today. She loves them because they make her look like a million bucks. They also make her look a little bit taller. That is why she can never do without them. And she does not have to worry about any effects they might have on her because her slave is always available to massage her feet and pamper them whenever she wants.

Mistress Eva and her shoe fetish

Mistress Eva has a shoe fetish. She likes to wear high heels because they make her look sexy. But the shoes make her feet sore and paining at the end of the day. That is why she brought in a slave to be massaging her feet and licking them whenever she comes home from work. That way, she can continue to wear her shoes but not worry about the effects of doing that.

Lady Alshari puts on her new over the knee high heel boots and she knows that they drive you crazy because you have a foot fetish. She slips them on over her gorgeous feet and legs and takes time to lace them up. This foot tease takes a while and she knows that it teases you so bad that you want to explode. You love having this POV of her feet. 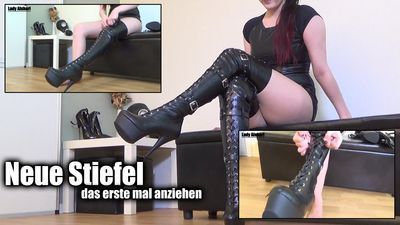 Megan Tries on Shoes for You

Dominating brunette Megan makes you her foot bitch by teasing you with all her shoes. She stands before a huge rack of shoes and tries them on one pair at a time. She wants you to start jerking off and decide which pair of shoes you want to come on. She tries on several different colors and types of high heels and puts her bare feet in your face in between.

Bratty Jamie is a stunning redhead in jeans and high heels who teases you with her feet and humiliates you but you don't mind because she is so hot. She talks to you in a sexy voice and dangles her high heels in her face. She takes her shoes off for you to lick them and now you have to lick her bare feet as well. She knows you have a foot fetish and a fetish for her.