All articles tagged with "Footboy"

Mistress Kylie degrades guy for being a nuisance

Mistress Kylie is not a patient person. When she feels that someone is pissing her off or is being a nuisance, she does not give them any time to learn their lesson. She makes them learn it the hard way and as soon as she can. Today she turned this guy into a foot slave. He had to lick her shoes and especially the soles before she was done with him.

Goddess Kiffa and her friend mistress Lana were bored. And in an effort to deal with their boredom, they chose to do something they had not done before. The mistresses found themselves relaxing on the sofa and as they did so barefoot, they found themselves having some foot play. And that is how the mistresses found out it was fun and they did it again and again until it became a fetish.

Goddess Katrina wanted to have fun at the expense of her ex. He was interested in her and he kept pestering her but she did not want him back. She chose to have fun at his expense and she did that by teasing and denying him. When the guy saw her flaunting her hot body, he thought he would fuck her but he ended up being left high and dry.

This mistress took out her flip flops and she used them to dominate and humiliate this loser. The mistress trampled the guy using the flip flops and then she asked him to lick them as well as her feet. And he had no choice but to do what he had been asked. That is how he learned never to piss her off and to always obey his mistress to avoid such punishments.

Buy this video at Yezzclips.com now!

Mistress Chloe felt that this guy was doing things that he did not need to do and he refused to be corrected when it came to correcting him. She could not stomach that behavior and so she used her boots to dominate and punish the guy like he had never been punished before. The mistress also had him lick the soles of her boots before she was done with him.

Goddess Katrina teases guy and turns him into a shoe slave

Goddess Katrina wanted to turn this guy into a shoe slave and she succeeded in doing it when she teased him. Once he had gotten turned on, she had an easy time controlling him. The mistress made him do what she asked him to do and for today, he had to lick her feet as well as her high heels. He even smelled them as she ordered him to do.

Mistress Anna had beef with her boss and she knew today was her best chance to deal with him. She had been waiting for this opportunity for a long time and she took it. The two of them were the only ones left in the office and so she used her high heels to trample him and to humiliate him. That is how she made him make amends for what he had done wrong. She was not afraid of being sacked.

Buy this video at Yezzclips.com now!

Mistress Molly sends a warning using her sneakers and socks

Mistress Molly wanted to send a warning to this loser so that he did not bother her again. She used her sneakers and her stinky socks to do it. In no time, he was scared as she told him what she would do to him with her sneakers and with her socks. He did not want any of it so he had to change and she was glad she did not have to do it.

Goddess Yasemin wanted answers from this guy but he was stubborn. He did not want to give them to her and she did not want to beg him for the answers. So she did what she does best and she used her high heels to torture as well as dominate him. That is what made the guy stop being stubborn and give her the answers that she wanted from him.

Goddess Grazi wanted this loser to learn that she did not take rudeness kindly so she used her high heels to trample and punish him. He was humiliated more than he had ever been before. He cried at what she did to him but she did not care as she felt he had not yet learned his lesson. So she went on with her punishment and she made sure it was worth it. 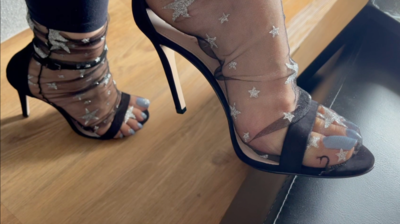